Can I give my dog Zyrtec?

It’s that thump, thump, thumping in the middle of the night that’s kept you awake for untold hours, your dog’s at it again. The incessant scratching, the never-ending licking and chewing that says it’s allergy season again. If you’re feeling like your dog has tried every medication on the planet to help with his allergic scratching, but they just don’t work, they knock him out or they’re too expensive, don’t give up yet. The over the counter antihistamine Zyrtec may be the answer to his itching problems. Before we get to the use of Zyrtec in dogs, let’s first touch a little on allergic responses, why they happen, and how medications like Zyrtec work to stop them. When an allergen crosses your dog’s path, either in his food or in the environment, special cells in your dog’s skin, called mast cells, release large quantities of histamine and other inflammatory chemicals. The histamine especially triggers an inflammatory reaction that shows itself as redness, heat, swelling, and itchiness. This inflammatory reaction can occur every time your dog comes in contact with the allergen. This means if it’s in his normal food or a plant in your yard, you’re looking at possibly neverending itching and scratching.

The best treatment for allergies is to find the offending allergen and remove it from your dog’s diet or environment; easier said than done. The next best treatment is to prevent the inflammatory reaction by blocking the actions of histamine. A final treatment would be anti-inflammatories to decrease the severity of the reaction. Anti-inflammatories do nothing to prevent the allergic reaction they just help to treat it after it’s already happened. 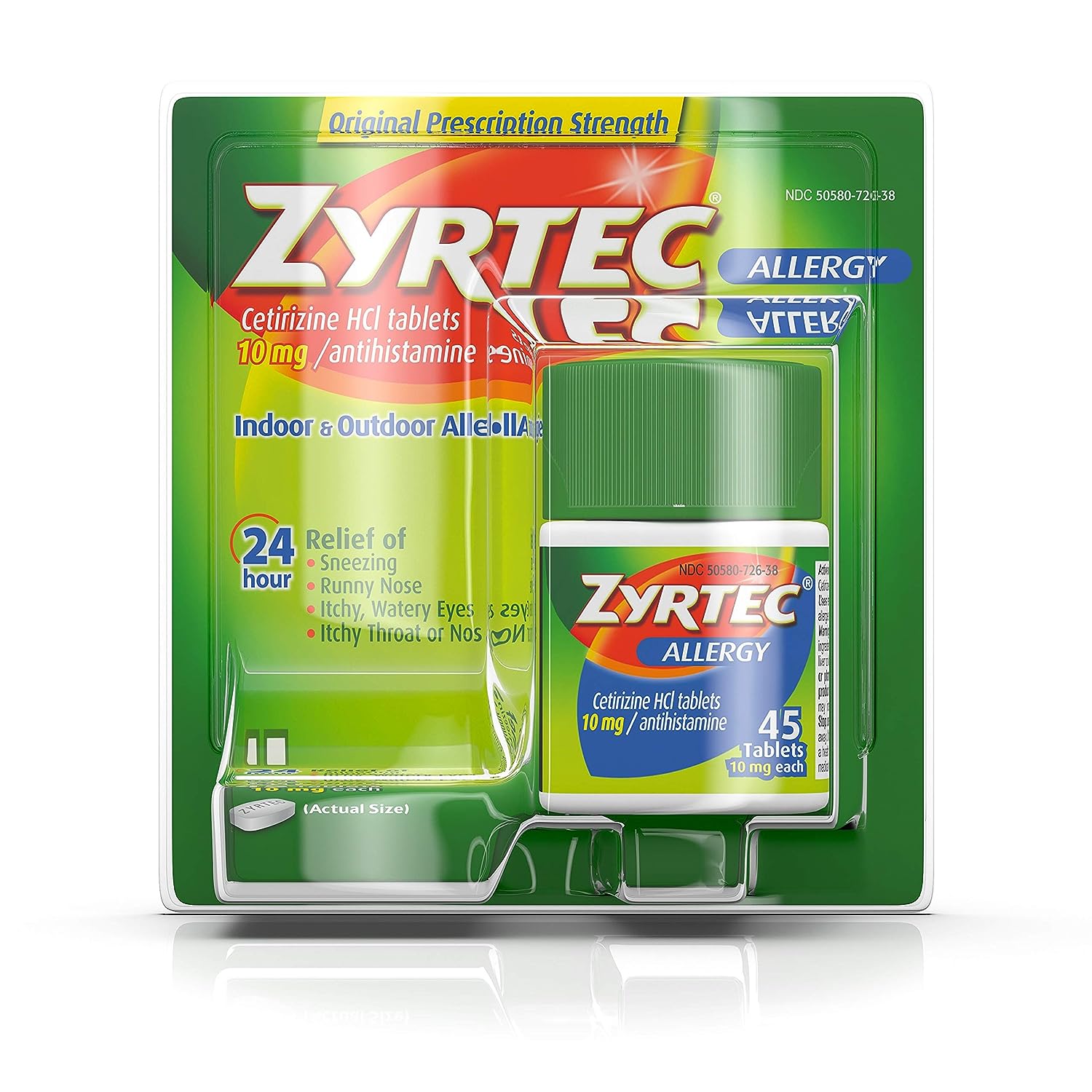 Zyrtec, or cetirizine, is an antihistamine. It basically works by blocking the histamine so that it can’t illicit such a profound inflammatory response in your dog’s skin. As you may know from using other antihistamines on your dog, some can cause sleepiness and even mild sedation as a side effect. Zyrtec is a slightly different class of antihistamine than these so it tends not to produce the drowsiness that you’re thinking of.

Zyrtec can be used to treat long term allergic reactions in your dog caused by seasonal allergies and food allergies. It can also be used in the short term to treat insect bites or stings and poison ivy or poison oak reactions.

What Are the Side Effects of Zyrtec?

Fortunately, Zyrtec is fairly well tolerated by dogs. The most common side effects reported are vomiting or excessive salivation after giving the pill. This may be prevented or decreased by giving the dose with a small amount of food or with a meal.

Drowsiness has been noted in smaller dogs when given the higher dosages. It’s always best to give the lowest dose first and work up to the higher doses if needed to help avoid these side effects.

Zyrtec should not be used in dogs that are also taking other central nervous system depressants like diazepam or alprazolam. The combination of the two drugs could cause heavy sedation.

What Dogs Can Use Zyrtec Safely?

Since Zyrtec is well tolerated in dogs, really any itchy dog may benefit from using it. Precaution should be used in older dogs or ones that are suffering from liver or kidney disease as they won’t clear the drug from their system as efficiently. It may be best to try alternative treatments for these dogs before reaching for Zyrtec.

Zyrtec is safe to use in pregnant dogs. Even large amounts of the drug cetirizine have shown no ill effects to the developing fetus. A small percentage of it does get excreted in the milk however, so it is best to not use Zyrtec in nursing bitches.

There is an additional Zyrtec product on the market that includes pseudoephedrine, a decongestant popular in human cold medications. This product, Zyrtec-D, is not safe to use in dogs. Dogs are okay with the drug cetirizine, but pseudoephedrine is extremely toxic. Always be sure that you are getting Zyrtec and not Zyrtec-D when purchasing this allergy medication.

As with most medications, the Zyrtec dose is based on weight. It’s important to never guess at your dog’s weight as there could be a huge variation. Get an accurate weight using a scale before giving your dog any medications. Always discuss medications and dosages with your veterinarian before administering anything to your dog.

Teacup Chihuahua: All You Need to Know About The World’s Tiniest Dog German Shepherd Lab Mix (A.K.A. Sheprador): The Best Playful Family Dog?

Cats Vs Dogs: Which Makes A Better Pet?