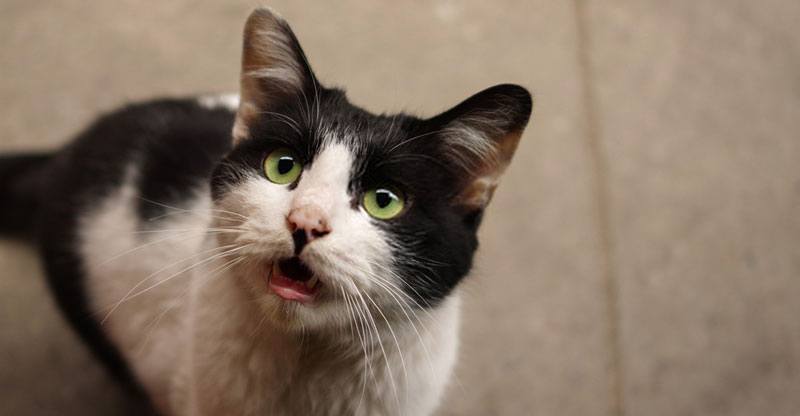 Cats aren’t a one-noise-fits-all type of critter. As any cat parent knows, they’re quite the opposite. Along with the regular meow, cats may purr, cry, hiss, yowl, growl, and trill. Especially vocal kitties may even have a combination of any of these. Why do cats need so many different ways of expressing themselves? Just like us, the noises that they make convey emotions, and promote socialization. To further understand this, let’s look deeper into why cats trill.

What is a Cat Trill?

If we were to put the cat trill in terms of human sounds, it would be like rolling your r’s, think the Spanish words “arriba” or “tierra”. It requires pushing air through the vocal cords while the mouth is shut, causing the tongue to vibrate. Some characterize it as a cross between a meow and a purr. If you’re still having a hard time picturing a cat trill, check out this video.

Where Does Cat Trilling Come From?

Like most young animals, cats learn to make the majority of their noises from their mothers. Mother cats use trills or chirps to get their kittens’ attention so that they will follow her, come get lunch, snuggle in, etc. Kittens then start to mimic these sounds and put them to use with other animals and their humans as well as they grow.

What Does Cat Trilling Mean?

Most of the time cats use trilling as a positive noise and as a form of greeting. “Hello”, “How are ya?” or even “Hey, over here!” Trilling will usually be in combination with some form of body language, such as rubbing against you or moving away while looking back at you. They may also use it as a way to show pleasure in your company or your affection. You may notice that your kitty trills more when you just get home or when it’s time for dinner and their bowl hasn’t yet been filled.

Trilling can also be a comforting noise to cats, reminding them of their kittenhood. Similar to the kneading behavior, trilling is a familiar noise that helps give cats that safe and comfy feeling of being taken care of by their mother and sleeping in a pile of their brothers and sisters.

Why Do Some Cats Trill and Others Don’t?

The chattier a cat is in general, the more likely they are to trill. Trilling is usually left for those social butterflies that are constantly seeking attention or affection from you or other critters. Shy, quiet cats may choose to use meowing, rather than trilling, as a more succinct way of getting what they need.

Trilling may also depend on your cat’s mood. If they’re happy, excited, or content, they may use trilling as their form of communication, whereas if they’re upset or scared, they may choose to yowl or meow.

If your cat doesn’t trill, it doesn’t mean there is anything wrong with them. Just like there are some people that choose to skip down the street while others walk, the use of trilling is all based on personality.

Should You Try to Stop Your Cat From Trilling?

Since trilling is usually considered a happy, positive noise, there is no reason to stop it. The only time it would become a concern is if your cat is trilling constantly and not in response to anything in particular. As cats age, they can experience similar issues to dementia and may trill due to disorientation or frustration. If your older kitty seems to be experiencing symptoms of dementia, including incessant trilling, visit with your veterinarian for ways that you can possible slow the progression and make them feel more comfortable.

Should You Trill Back to Your Cat?

You may find it easy to converse with your trilling kitty and don’t be afraid to respond. Since trilling means that a kitty is in a happy, social mood they may welcome a trilling response or just some upbeat conversation and petting. While cats may not understand individual words, they do get tone and body language and if kept positive is a great way to bond with them.

Trilling is one of many noises in a cat’s conversational arsenal that allows them to express their emotions with you and with other animals. As compared to meowing, trilling should be seen as a purely positive noise that your cat uses as a greeting or way of getting attention. Choosing to respond to your trilling kitty can be a great way to cement that animal-human bond for a lifelong friendship.

Why does my cat trill instead of meowing?

Cats will make a trilling sound and meow for different reasons. As you get to know your feline friend, you will start to realise what your cat is asking for by the different sounds they make. Some cats only trill for positive reasons such as to express happiness or say hello, while others may trill to alert you to something.

What breed of cat trills the most?

All breeds of cat are generally very expressive animals. However, the following breeds of kitty have been known to enjoy the high pitched sound known as trilling more than other breeds.

• Bengal – Bengals have a very distinctive voice and are known for being attention seeking cats.

• Burmese – this lovable breed of kitty is very active and social, so they like to vocalise how they are feeling, particularly when they want attention.

• Siamese – another energetic cat that loves to play. If a Siamese cat feels like they are getting ignored, he will trill until you give him your undivided attention.

• Ocicat – this kitty breed loves being talked to. He will talk back by trilling or meowing to his pet parents.

• Sphynx – known as one of the most vocal cat breeds, a sphynx will trill or meow whenever he is trying to tell you about their basic needs or that they want some fuss.

Cats of either sex or any breed can be vocal. A female cat in heat tends to make different noises when they are searching for male cats to mate with.

Trilling is often used by cat mums as a form of communication to their offspring. A mother cat trilling to her litter could mean follow me or it’s time for some milk. Once the kittens have left their mother, they may start trilling to their human parents for the same reasons.

When do cats trill the most?

A cat will trill when he is hungry, tired, unwell or bored. When your cat trills will depend on his daily routine. If your kitty tends to sleep the most in the day, you may hear him trill at night out of loneliness. You may find your four-legged friend trills the most during their playful bursts. Cats are known for having a crazy five minutes where they might run around the house trilling and making noises.

What should I do if my cat trills all the time?

Even if your kitty trills consistently throughout the day and night, it doesn’t mean that there is something wrong with him. Some cats are more social and vocal than others and use trilling as a way to communicate. However, if you’re concerned about the amount of trilling your pet does, speak to your veterinarian for advice. On some occasions, a cat does trill to let its cat lovers know that something is wrong. Your vet will be able to do some checks on your kitty to check for any potential problems that may be causing your feline to be more vocal.

Should I be worried if my cat doesn’t trill?

Not all cats will trill. If your cat is shy, he won’t feel like making noises but it doesn’t mean that anything is wrong with him. Next time your cat is trilling, observe his behaviour to see what he’s trying to tell you.

What does trilling between a mother and kitten mean?

Mother cats will trill to get the attention of her kittens or encourage them to do something such as drink her milk. Trilling is believed to be a form of communication between cats, which is then mimicked later in life by adult cats with other animals and humans.

Why does my cat trill when he jumps?

Cats will often make noises when they jump to attract the attention of their owners or other animals. Felines are proud animals and will want their human friends to witness a spectacular jump. The noise a cat makes when he is about to jump can also be an indication that he is about to catch some prey.

Do cats trill at each other?

Yes, felines often use trilling to communicate with other cats. You may hear cats trilling to each other as a way to have a conversation. Trilling is most often a positive sound so it’s unlikely that cats will trill to each other as a warning to stay away, instead it’s more likely that they are having a friendly chat. Humans can also trill back to their four-legged friends.

What is a cat chortle?

If your kitty is making a birdlike noise that sounds like a mix between a purr and a chip, your cat may be chortling. Cats often chortle when they show an interest in something such as prey or a treat.

Why do cats make a chattering sound?

You may notice your four-legged friend chatter his teeth together while staring out the window at a bird or squirrel. Some people believe that this noise is a mimic of a bird call, while others think it’s a sign of predatory excitement.

What other noises do cats make?

Take note of these other sounds cats make and what they mean.

The purr – the adorable soft rumble sound that comes from your kitty can mean various things. Cats most often purr when they are relaxed and being stroked. It’s a way of expressing their calmness. Cats communicate by purring to bring attention to their needs and emotions with their owners too.

The growl – cats will growl to show that they are unhappy. This could be because they are stressed or telling another animal to stay away.

The moan – if your cat makes a muffled moan noise that sounds like ‘Owww, Mowww’, it could mean that he is celebrating catching his toy mouse and wants to show it off to his owner.

Why do cats like to rub their face on you when purring?

When a cat rubs his face or body against a person or objects he is releasing pheromones, which means he refers to you or the object as his friend. This affectionate gesture is called bunting and is also used by cats as a greeting.

1 thought on “Cat Trilling: Why Do Some Cats Trill and Others Don’t?”